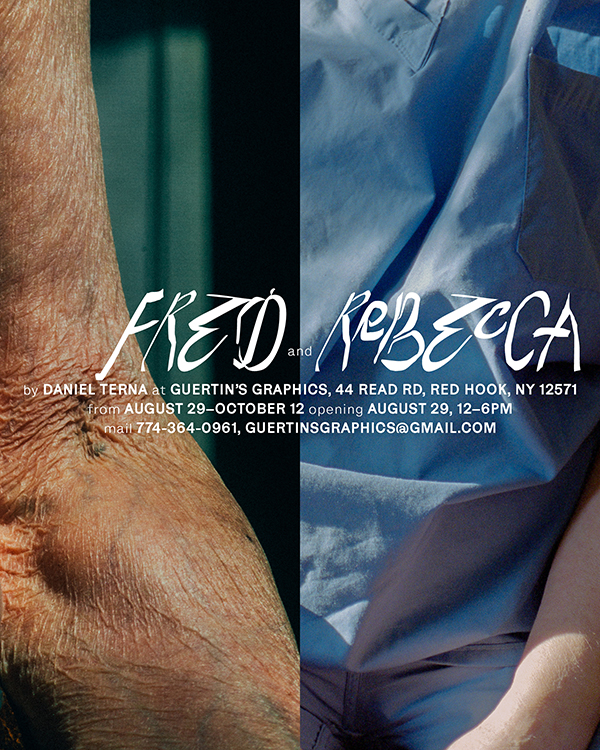 
Guertin’s Graphics is excited to re-launch in the Hudson Valley, NY with a new body of work by artist Daniel Terna.

Daniel Terna often seeks inspiration in daily life and his close surroundings. Since March 2020, he has quarantined with his family at their home in Clinton Hill, Brooklyn and has focused his attention on his parents as his subject matter. For this exhibition, Terna will show a group of color photographs split between two sections of the gallery. In one room, he will show documentation of his father, Fred, who is a painter and a 96-year-old Holocaust survivor, and in the other room, portraits of his mother Rebecca, who works as an OB/GYN at a hospital in Brooklyn.

Since 2011, Terna has incorporated his father into his work. For this new series, Fred, he began following his father through his daily routines using an old telephoto lens. The lens, used for long distance shooting, allowed Terna to stay physically distant from his father while illustrating intimacy by magnifying his subject in the frame. Terna observed his father as he travelled outside of the house during the shutdown, when he mailed a letter, went grocery shopping, or simply went for a walk. These everyday actions become risky and precarious for a 96-year-old with or without the presence of a pandemic.

Terna’s high contrast and saturated color prints, multiple images arranged and installed in sequences, convey the suspense of extremes. The abstract feeling of time slowing down during the quarantine is contrasted with an urgency to capture a person’s vitality as their body and movements change rapidly in old age. In April and May, while Terna was focusing on his father, cherry trees blossomed and tulips and magnolias around the neighborhood exploded. It was a shock to the senses to those cooped up at home in apparent stasis to notice nature experiencing drastic change. The juxtaposition of closeups of flowers remind us of a parallel world outside of the home and body.

Displayed in the second gallery, a selection of four out of a series of eighteen portraits highlight the role of Terna’s mother in the eponymous series Rebecca. During the height of the pandemic in New York City, from April 7 to May 5 , 2020, he greeted his mother every day as she came home from the hospital. Still in her scrubs, Terna took two exposures, one from a medium distance, and one closer-up. Seemingly taken in a single session, eighteen workdays represent the experience of one doctor in the field as our understanding of Covid-19 was developing. A doctor’s routine of returning home from the hospital, before stripping off scrubs, and showering to limit the transmission of illness to loved ones, is captured by Terna as he witnesses the transitional space between the outside world and the presumed safety of home.

Daniel Terna (b. 1987) is a Brooklyn-based photographer and filmmaker whose work focuses on family history and inherited trauma, as well as diverse subjects related to public and private boundaries. In 2019, his work was included in a two-person exhibition at LY, Los Angeles. Recent group exhibitions include those held at Jack Barrett, New York (2019), Elizabeth Foundation for the Arts, New York (2018), Baxter St. Camera Club of NY (2015), and the New Wight Biennial, UCLA (2014). His work has also been screened at selected venues, including the Echo Park Film Center, Los Angeles (2020), MoMA PS1's film program in Greater New York, Queens (2016), the New York Film Festival’s Convergence Program (2014), Eyebeam, New York (2013), the Austrian Cultural Forum, New York (2012), and the Carpenter Center for the Visual Arts, Cambridge, MA (2011).

Production of this project was made possible with support from Asylum Arts.

There is a lot of outdoor space to enjoy.
Please wear masks at all times.
Only 3 people inside the gallery at a time.
Please remain 6 feet apart.
Please stay home if you are not feeling well or if you have come into contact with anyone with Covid-19.